Finding fruits that start with H isn’t as hard as I thought it would be. From hazelnut to huito, I’ve listed some fruits from around the world that might sound a little too new to you. 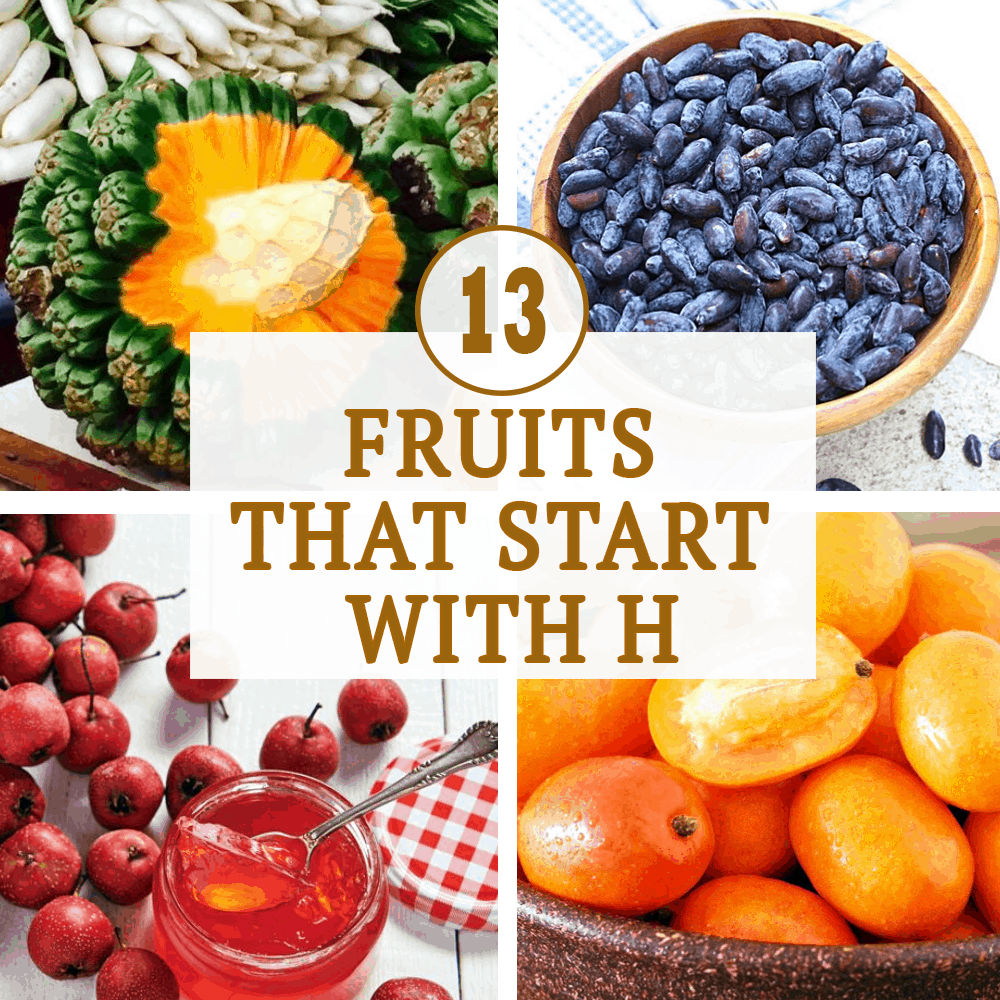 It has a delicate sweet taste, similar to the paste made from the leaves. These are enjoyed fresh, boiled or ground into a paste, or squeezed into juice.

This may sound a bit of work, but to eat a fresh Hala fruit, you’ll have to use the claw of a hammer to remove a couple of the keys.

Chew on the center of each key to break down the fibers, then suck out the sweet nectar inside.

Also known as yellow mombin, hog plum is a species of tree and flowering plant in the family Anacardiaceae.

When ripe, these plums have been acclaimed by many to treat sores and are often used as a heart tonic. Consuming it is not all medicinal though, because it is often added to smoothies and juices to spice things up a notch.

And not only that, the unripe fruit is used as a side in many Mexican foods or added in fiery pickled relish.

Hazelnuts are also known as cobnuts or filberts according to species.

A confectionery to make praline, and also used in combination with chocolate for chocolate truffles and products such as chocolate bars, hazelnut cocoa spread, and Frangelico liqueur. Yum!

These nuts also produce hazelnut oil which has a strong flavor and commonly used in salads or as a cooking oil.

Unlike the rest of its cousins in the genus clan, these ones do not produce the hair-like fiber covering you’ll usually see in regular-sized kiwis.

Since they have “fuzzless” and thin skins, they may be eaten whole without peeling!

Perfect enough for afternoon snacking or as toppings on this Fruit Pizza recipe HERE.

Also called the Kiwano, African Horned Melon, and Jelly Melon, this thorny fruit is known to have originated in South and Central Africa and is now widely available in Australia, New Zealand, and the USA.

Its wild-like appearance and distinctive flavors are a cross between the cucumber and melon family. A ripe horned melon has orange skin with a gelatine-like inside surrounding the seed which is all edible.

But it only gets better, coz this ball of immuno-booster also makes a great addition to a cocktail.😉

Gleditsia triacanthos, or popularly known as Honey Locust, is a tree native to the central United States.

It gets its name from its sweet sticky pulp produce. The long pods, which eventually dry and ripen to brown or maroon, are surrounded by a tough, leathery skin that adheres strongly to the pulp within.

The pulp – bright green in unripe pods – is strongly sweet, crisp, and succulent in ripe pods.

These fresh spring fruits are an absolute treat that you don’t want to miss!

Also called haskap berry (the Japanese name for the plant), honeyberries taste like a cross between raspberries and blueberries.

Some might even classify these oblong blue berries with a taste profile similar to that of kiwi, cherry, or grapes. They can be eaten fresh or used in ice creams and other desserts.

Commonly called hawthorn, quickthorn, thornapple, May-tree, whitethorn, or haw berry is a genus of several hundred species of shrubs and trees in the family Rosaceae.

Hawthorn berries grow on trees and shrubs and are packed with nutrients.

As for the flavors, it has that tart, tangy taste, and mild sweetness – perfect enough as a base for jams, jellies, and sauces.

The honeydew melon or sometimes called green melon is a beautiful soft melon that is sweet and juicy just like what its name suggests. (It makes a good addition to this Fresh Fruit Salad ).

It is characterized by its smooth rind and lack of musky odor.

Honeydew melons are a good source of vitamin C, B, potassium, and other boatloads of nutrients even though 90% of it is just water.

Similar to a blueberry but much larger, Huckleberry only sprouts single berries where the leaves meet the stem.

These berries are small, round, and are tart, with a taste similar to that of a blueberry.

That’s why they make the perfect main ingredient for jam, pudding, pie, ice cream, dressings, tea, and even soup. I might have to actually try that last part.

In case you’re still confused, tomatoes are technically a fruit. They are actually classified as edible berries which makes them cousins with strawberries.

They often have colors, textures, sizes, and flavors that vary from species to species, in the same way, that apple varieties do.

This fruit is of medium size and its shape is round to slightly oblong. When ripe, Hyuganatsu turns a light yellow.

Its flesh is juicy and sweet with a slightly sour taste. They are believed to be a naturally occurring hybrid of yuzu and pomelo.

And this isn’t your average kind of citrus because Hyuganatsu is eaten along with the pith (shocking, right?), which is not bitter, unlike any other citrus fruit!

Alternatively and commonly known as “genipapo” this fruit is sometimes called Jagua which signifies other species of genipa.

It can be used as a key ingredient in making many processed food products such as jams, desserts, syrups, ice cream as well as in preparing lemonades.

This fruit is a very good source of dye that is mainly used in body painting and art. Its juice is clear but changes its color to blue when it gets in touch with human skin. Interesting!