There’s a lot of oil that can be used as a sesame oil substitute. But, it’s not easy to replace that distinct aromatic and nutty flavor. So when substituting for sesame oil, always consider the taste you’re going for your dish and the smoking point. Our list will help you out in choosing the best substitute! 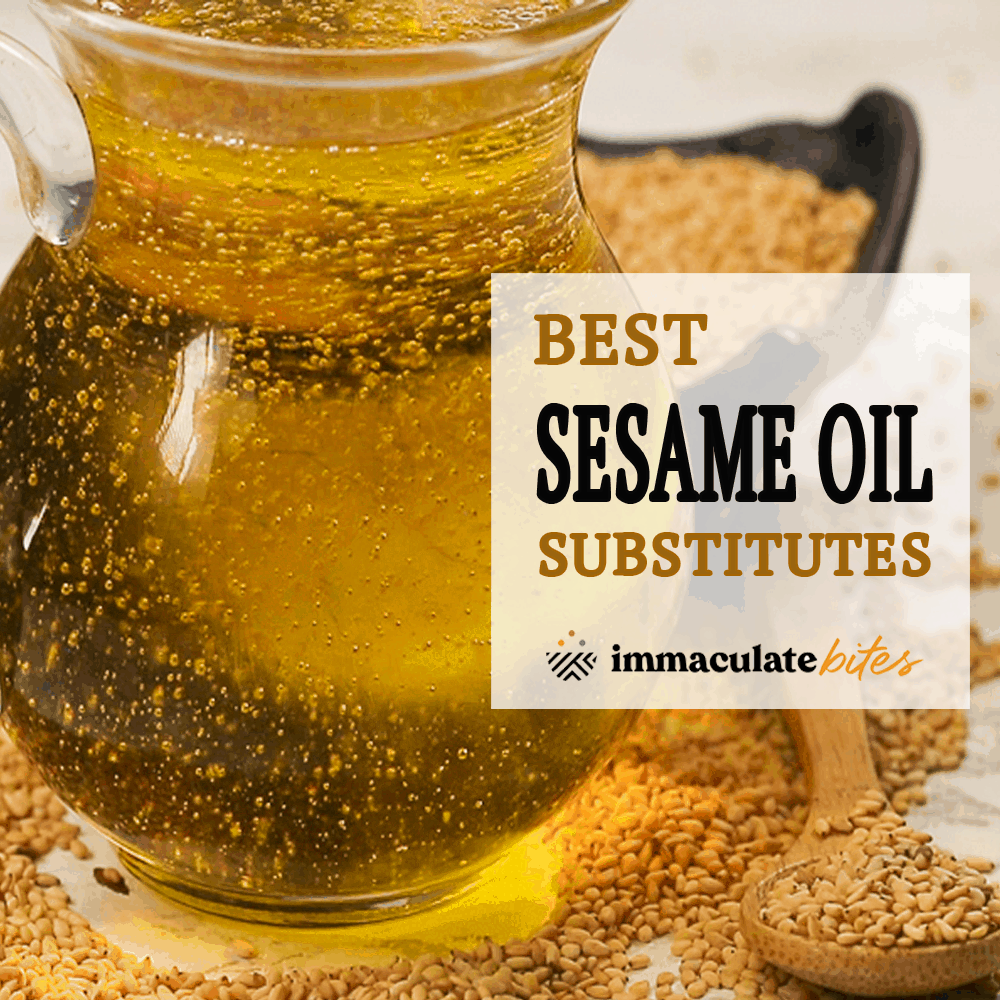 Sesame oil is a healthier choice than other oils because it contains a lot of monounsaturated fat and has a high smoke point, making it useful for frying, sauteing, roasting, and baking.

The laborious seed harvesting makes it a high-priced product even if the seeds yield more oil than any other oil seeds. In fact, there are many culinary uses for sesame seeds. You can add them to seasoning mixes (just like my everything bagel seasoning) recipe, salad dressings, and soups.

These are just some of the things we get from consuming sesame oil, though I’m sure that there’s more to it. For now, I will deal with how to replace it with another good oil.

What is Sesame Oil?

One of the earliest condiments – sesame – is also used in cooking different dishes. The oil is produced from raw sesame seeds, contributing to its neutral flavor and high smoke point.

It is suitable for frying, sauteing, and roasting. However, there’s also “toasted sesame oil,” which is (you’ve guessed it!) a nuttier and darker type of sesame oil.

The difference between these types of sesame oil is in each one’s color, taste, and smoke point.

Additionally, toasted sesame oil will have a stronger flavor but has lower smoke point than light sesame oil. It is usually used as a seasoning for cooked food or added to sautees at the final stage.

Have you eaten nuts that taste bitter and sour? Yes? Then, they were probably rancid.

The same thing goes for sesame oil, especially if it’s not stored properly. It goes bad and changes flavor and color, as with any rancid oil.

Store it in a cool, dark place away from sunlight, or even better, put it in the refrigerator to help extend its shelf life. 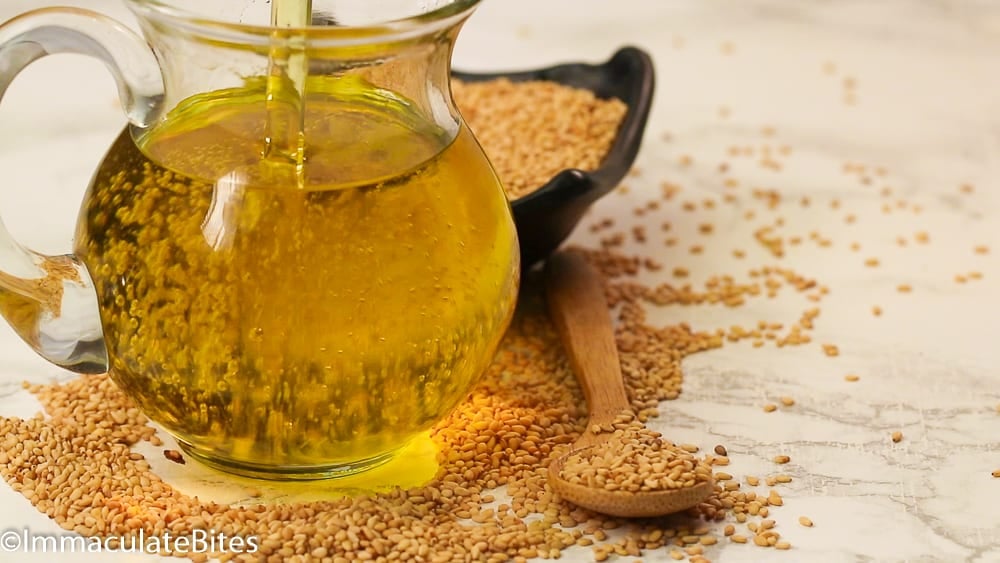 We can replace sesame oil with other vegetable oils with the same or at least similar qualities like flavor, smoke point, and healthy fat.

This oil is derived from canola seeds or rapeseeds. It is low in saturated fat and considered to be healthy.

Canola oil is a good substitute for sesame oil because of its neutral flavor and high smoke point. Substitute with a 1:1 proportion.

You got it! This oil is extracted from sunflower seeds. It is not only used in skincare products for its non-pore-clogging properties but also in food, of course. Sunflower oil is perfect for frying, sauteing, and baking.

It also has a nutty flavor and high smoke point, making it a good sesame oil substitute. Use equal amounts when substituting for sesame oil.

A widely used and highly commercialized vegetable oil derived from the oil of palm fruit. It has a neutral taste with a high smoke point. Though it lacks that sesame oil flavor, it is still a good replacement for sesame oil. Substitute with a 1:1 proportion.

This oil is extracted from grape seeds that are a byproduct of winemaking. It’s also high in antioxidants, has a neutral taste, and high smoke point. Plus, grapeseed oil is considered an all-purpose oil for its “good oil qualities.” Use equal amounts as substituted sesame oil.

This oil can be a good substitute for sesame oil for its refined neutral flavor. It may not give the same nutty taste, but instead, a very light coconut flavor might be present.

When choosing between refined and unrefined, keep in mind that unrefined virgin coconut oil has a distinct natural coconut flavor.

Refined and unrefined coconut oil has a good smoking point that can be used in sauteing and frying. Use equal amounts as substituted sesame oil.

A healthy alternative for sesame seed oil with a different piquant flavor than sesame oil.

Olive oil has a medium-high smoke point which makes it ideal for cooking at low temperatures. Substitute sesame oil at 1:1 proportion.

You can also use this oil for vinaigrettes (like what I used in this Nicoise Salad) and marinades.

An incredible oil good for cooking and frying because of its high smoke point. Avocado oil is also high in monounsaturated fat, oleic acid, and other nutrients. It is suitable for both skincare and cooking.

Though its rich flavor and high-heat cooking profile make it a good substitute for sesame oil, it won’t provide the distinct nutty flavor of sesame oil.

This oil is derived from peanuts (groundnuts) that are high in monounsaturated fats. It has a high smoke point making it a suitable alternative for sesame oil. Plus, it also gives you a mild nutty flavor that is similar to the sesame oil flavor.

Another type of peanut oil is roasted peanut oil, which, like in toasted sesame oil, will give you a whiff of stronger peanut flavor. Substitute sesame oil at 1:1 proportion.

In cooking, browning, searing, or roasting meat and other ingredients help bring out more flavor. The same thing applies to infusing flavor in oil and sauces.

Toasted sesame oil, as I’ve mentioned above, is light sesame oil’s nuttier, aromatic, and darker version. It has a lower smoke point than sesame oil. That is why it is commonly used as a finishing ingredient in cooking and added to other dishes after cooking.

Alternatively, if you just need that nutty sesame seed flavor, then you can just roast sesame seeds in a pan while continuously stirring to avoid burning them. 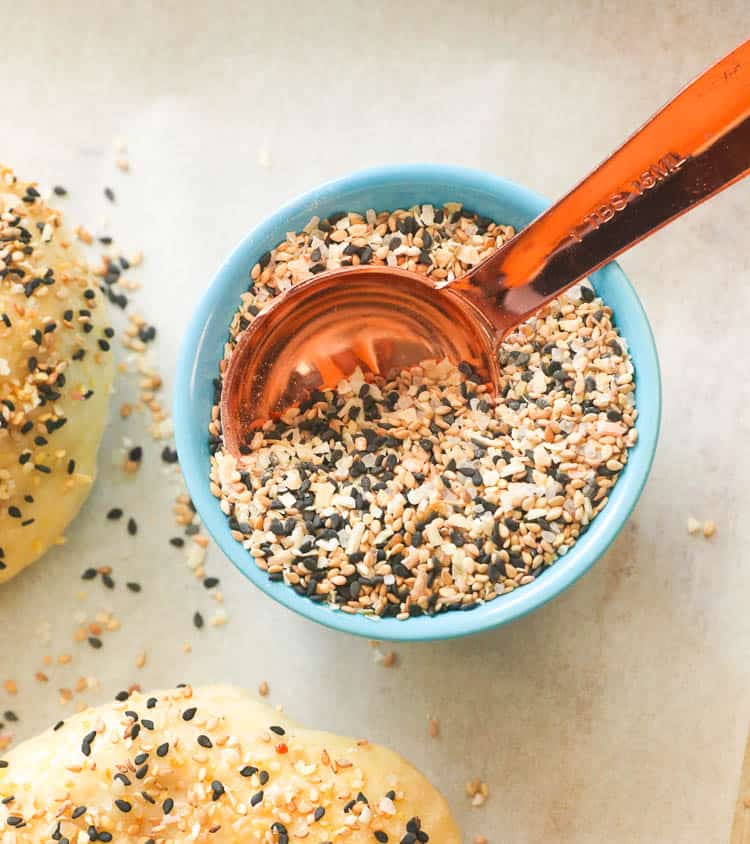 There you have it! The best way to substitute sesame oil is to look into your recipe first and compare the neutral oils I’ve listed above. You can also make a DIY infused sesame oil in 3-easy steps. Don’t forget to store them properly.