ChocoFlan – Moist, decadent chocolate cake layered with a luxurious, silky smooth flan and topped with a Mexican caramel sauce called cajeta. This chocoflan is one of the most delicious and magical cakes you’ll ever make. It’s gorgeous and tastes even better. 🤩

The first time I encountered chocoflan was at a Cinco de Mayo party where my friend dubbed it the “Impossible Cake.” I was intrigued and had to make one of my own. The list of steps looks intimidating, but I was shocked to find it’s actually quite easy and impossibly delicious! 🤤

It’s seriously hard not to go back for seconds and thirds with this cake. For me, it’s all about the beautiful combination of textures and flavors. Cake, flan, and cajeta make the perfect trio if you ask me.

What Makes Chocoflan So Special?

Cake and flan go beautifully together, but I think what really makes chocoflan special is the cajeta. Cajeta is the Mexican version of caramel sauce. It’s a lovely sticky sauce made by caramelizing goat’s milk and sugar until it turns into a thick, rich brown sauce. If you’re familiar with dulce de leche made with cow’s milk, which I’m also obsessed with 🤫, it’s similar as far as color and texture go. Cajeta is literally and figuratively the icing on this cake, and it is uh-mazing!

How to Make Chocoflan

Chocoflan is actually best made ahead of time since it needs time to bake and then chill. You can make it three days in advance and store it in the fridge until you are ready to serve it.

Serve chocoflan chilled and drizzled with plenty of cajeta sauce (or another sauce of your choice).

Store any leftover flan in the fridge in an airtight container, so it doesn’t pick up any strange flavors from the fridge air. It should stay good for 3-5 days.

Why is chocoflan called the impossible cake?

Chocoflan earned this title because of its strange behavior when you bake it. Even though the chocolate layer goes in first and the flan after, when it comes out of the oven, the layers are reversed, with the flan sinking to the bottom and the cake floating. 🤯

What is the science behind chocoflan?

The baking soda with the buttermilk’s acidity produces gas, making the batter rise during the baking process. The denser flan batter sinks, and the ingredients switch places. Crazy, right?

Word on the street is that chocoflan comes from a fusion of French and Mexican cuisine, which came about sometime in the early 20th century when French immigrants settled in Mexico and South America. 🌎

Can you make your own cajeta?

I’ve done it, and it was awesome! However, it was incredibly time-consuming. Not a problem, though. Just replace the water and heavy cream in my caramel sauce recipe with an equal amount of goat milk, cut the sugar in half, and add a dash of cinnamon. You’re good to go with the recipe.

What Goes With Chocoflan

Try chocoflan with a cup of coffee or ginger tea. I love desserts with something hot to drink, so if you’re feeling fancy, you could even make a chai tea latte to go with it.

You could also get a little more elaborate with decorations and serve this cake with candied pecans, homemade whipped cream, and more caramel sauce. Chocoflan tastes amazing with all of the above.

Sure, chocoflan takes a little time to make, but it is totally worth it. You’ll have a gorgeous dessert that tastes so good you’ll give yourself a little pat on the back. Have you tried this amazing recipe yet? Please leave me a recipe review when you do. 😉

Watch How to Make It

This blog post was originally published in September 2020 and has been updated with additional tips. 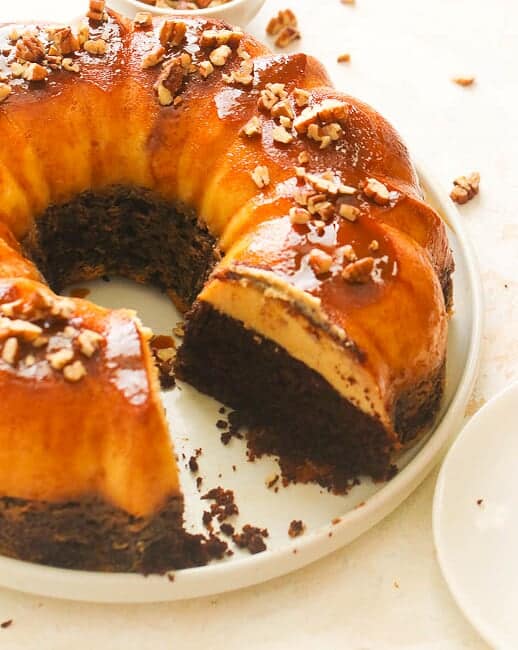 Moist, decadent chocolate cake layered with a luxurious silky smooth flan and topped with a Mexican cajeta. This is one of the most delicious and magical cakes you'll ever have. With its sweet and creamy vanilla flan topping off a moist chocolate cake, you'll be eating this cake slice after slice!
5 from 4 votes
Prep: 25 mins
Cook: 1 hr 20 mins
Cooling Time: 3 hrs
Total: 4 hrs 45 mins
Mexican
Servings 12

The MAGIC of this recipe is the flan will seep through the bottom and the chocolate on top as it cooks.